WATER IN THE EVERGLADES

Everglades National Park protects the southern portion of America’s largest freshwater marsh, the Greater Everglades (also known as “The River of Grass”). Water quantity and quality flowing through this Greater Everglades ecosystem is critical for the health of the habitats as well as the plants and animals in the park that depend on those habitats. Ideally, with uninterrupted sheetflow, water flows from the Kissimmee River in Central Florida into Lake Okeechobee, then south through the Everglades and out the Florida Bay into the ocean. The Everglades has an immense capacity for water storage because of the permeable limestone beneath the exposed land. Most of the water arrives in the form of rainfall, and a significant amount is stored in the limestone. Water evaporating from the Everglades becomes rain over metropolitan areas, providing the fresh water supply for the region. 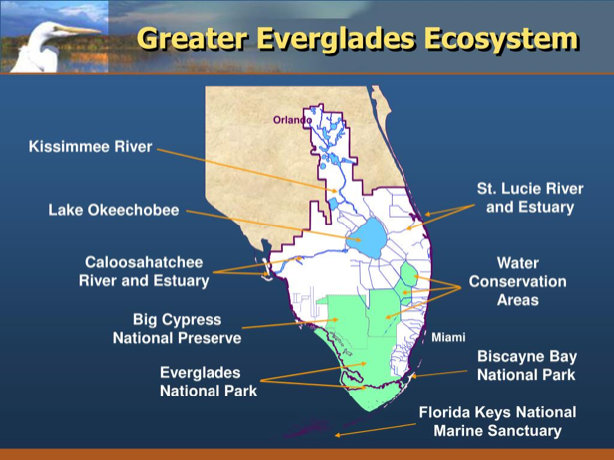 Unfortunately, a long history of agriculture and urban development in this region, including draining and diverting water flow and compromising water quantity and quality, has resulted in a degradation of the Everglades ecosystem. Thankfully, in 2000, Congress authorized America’s largest hydrologic restoration project to date, the Comprehensive Everglades Restoration Plan (CERP), with the goal of restoring, preserving, and protecting this critical ecosystem. In a unique Federal–State program, Everglades National Park seeks to restore the flow of clean water to the River of Grass and protect park resources for future generations.

During the 19th and 20th centuries, European settlers hunted herons and egrets in the area, whose feathers were popular with hat-makers in New York and Paris. During this time, poachers hunted alligators and American crocodiles near-extinction. When the timber industry established itself in the area, railroads were built to haul out the cut remains of the cypress ecosystem’s old growth trees. Portions of the area, which were slightly more elevated than the Everglades to the West, were farmed for winter vegetables.

Southern Florida saw its first real estate boom after the Tamiami Trail was finished in 1928. From the creation of Everglades National Park in 1947 until the late 1960s, the Big Cypress Swamp faced many threats. In 1968, a massive jetport’s construction began with the plan to create the world’s longest runway. The project and the consequential development would have destroyed the natural flow of fresh water through Big Cypress Swamp.

Ultimately, a diverse coalition of conservationists, hunters, private landowners, and Seminole and Miccosukee peoples campaigned to end the jetport development and secured permanent protection for this unique landscape. Congress created a new type of parkland, a “preserve,” to protect the swamp and freshwater flow and honor customary use of the area by those who worked together to protect it. Today, activities like oil and gas extraction, hunting, off-road vehicle use, private-land ownership, and traditional practices from the Seminole and Miccosukee peoples continue in the preserve.